What is an PO?

An IPO – an Initial Public Offering – is when a company decides to issue stock for the first time to raise money from external investors on a public market. This is also referred to as when a company “goes public” and officially becomes a publicly traded company. In the United States, a company needs to register with the Securities and Exchange Commission (SEC) before going public.

What is the history of IPOs?

IPOs have been taking place since the beginning of the stock market, when the Dutch conducted the first IPO by offering shares of the Dutch East India Company to the general public in 1602. Towards the end of the 1990s – the height of the dot-com boom – many startups rushed to list themselves on the stock market, leading to the dot-com bubble. After the 2008 recession, IPOs became more uncommon, only to increase again in 2010. 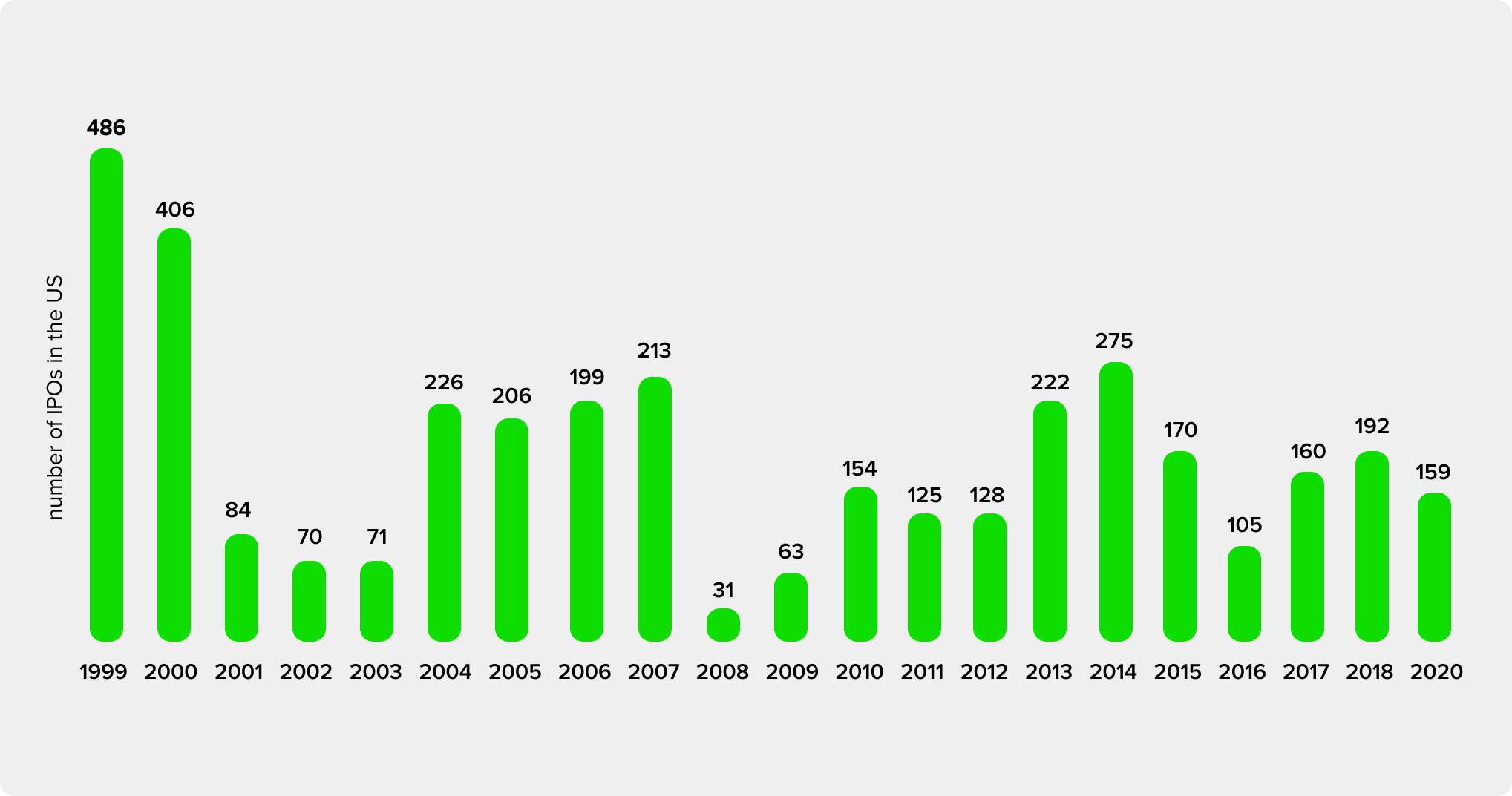 If a company’s private valuation hits $1 billion, they are considered a “unicorn.” When Facebook went public on May 15, 2012, its stock opened at $38 per share and raised $16 billion. Before Facebook (FB) held its IPO, it reported a net income of $1 billion in 2011. Other notable, more recent unicorn IPOs include Uber (UBER), Slack (WORK) and Pinterest (PINS).

Why does a company IPO?

A company may issue an initial public offering for several reasons – to raise money for growth, to scale or to allow early shareholders to liquidate their shares. IPOs also generate publicity and boost reputation.

Alibaba (BABA) held an IPO on the New York Stock Exchange in 2014, even though it’s a foreign company. Its main reason for doing so could have been to boost its reputation with investors and position itself as real competitor to amazon.

Are there disadvantages for a company?

There are a few disadvantages to initial public offerings that a company should consider before going public. Going public requires significant costs, such as legal, accounting, reporting management and marketing costs, as well as new costs that have to do with disclosing financial and busines information on a regular basis. In addition, the company could be required to reveal business secrets and methods that could help give competitors an advantage. Since an IPO essentially allows the public to become shareholders, new shareholders can obtain voting rights and control company decisions via the board of directors.

What is the IPO process?

When a company is looking to IPO, it solicits private bids from underwriters or makes a public statement to generate interest from underwriters. Once an underwriting firm – usually an investment bank (or multiple investment banks if the IPO is big enough) – agrees to manage the IPO, they will work together to determine the IPO price based on the valuation of the company. They will also work together to determine the type of security, the optimal time to take the company public, amount of shares they will distribute and the percent ownership the company will give up.  Once all of this is decided, the investment bank will list the shares on a stock exchange for the public to buy. This process can take anywhere from six to nine months to complete.

A company also has the option of a direct listing IPO – this is when a company conducts an IPO on its own without any underwriters, typically only feasible for companies will well-known brands. Choosing a direct listing could lead to more risk if it does not go well, but the company could end up with a higher share price, benefiting the company and shareholders.

A good example of a direct listing is Spotify (SPOT). In 2018, Spotify chose to issue a direct listing when it went public. At market open, Spotify shares were trading at $165.90, up almost 26% from the reference point of $132 that was set by the New York Stock Exchange. Since it had a strong brand, the company decided it was in their best interest to do a direct listing; and it paid off.

How can I invest in an IPO?

The two ways that the public can invest in an initial public offering are:

Once list day arrives – the day a company’s IPO takes place – investors can begin buying and selling shares after market open. There is typically a lot of media hype around IPOs, so it’s easy for investors’ emotions to influence trading. It’s not uncommon that share price becomes volatile and falls or rises after the IPO because of this and since there is little relationship between the offering price and the trading price of the securities.